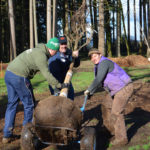 In 1967 Oregon Attorney General  Robert Y. Thornton hosted the 61st annual conference of the National Association of Attorneys General in Portland. As part of a conference event, Thornton planned for the Grove of the States as an homage to First Lady, Lady Bird Johnson, and her work fostering the 1965 Highway Beautification Act. The First Lady pushed hard for freeway right-of-ways filled with green landscaping and wildflowers instead of endless advertising.

When signing the bill, President Lyndon B Johnson said, “We have placed a wall of civilization between us and the beauty of our countryside. In our eagerness to expand and improve, we have relegated nature to a weekend role, banishing it from our daily lives. I think we are a poorer nation as a result.”

After saying, “Beauty belongs to all the people,” Johnson signed the bill and gave the first pen to Lady Bird, kissing her on the cheek.

Members of the Oregon Green Thumb Program were responsible for the hands-on construction and planting of the site. In response to the mid-20th century’s “War on Poverty,” the federal government created this small rural demonstration program to help economically challenged retired farmers. It offered them a chance to put their “green thumbs” to work beautifying America, while they earned much-needed income. It was common to see crews wearing bright green hard hats (throughout Arkansas, New Jersey, Oregon, and Minnesota) painting picnic tables, fixing playground equipment, and serving as groundskeepers for city parks and national forests.

During the Grove of the States’ dedication ceremony, Thornton emphasized the significance of the Grove to all Oregonians:
“First it will commemorate the visit to the State of Oregon of Attorneys General from nearly every state in this nation. Secondly, to the people of Oregon, the Grove of the States also will be symbolic… emigrants, if you please, have made this state what it is today and what it will become in the future; for there are scarcely any states in the United States of America today that did not send literally scores of its citizens by covered wagon, ox cart, horseback, sailing ship or on foot… to settle in Oregon.”

An article published the following morning in The Oregonian quoted National Association of Attorneys General President David Buckson, who drew analogies between the Grove and American entrepreneurialism:

“As we watch these trees grow in strength and beauty, may we also watch these United States grow,” Buckson said.

The Grove of the States went through a major restoration project in 2007 (https://oregontic.com/news-press/grove-states-restoration-project/)