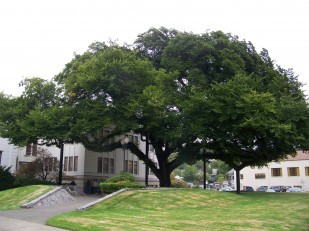 What does it take for a tree to be recognized as an Oregon Heritage Tree? The Travel Information Council researches each tree nomination with a dedicated group of volunteers. Certain criteria such as accessibility to the public, tree health and historic significance all play a role in whether or not a tree or grove qualifies.

Honored groves, single trees or groups of trees have something in common with one another no matter what the species – they are trees that tell a story; trees that confound and astound; trees that educate both Oregonians and visitors about significant people or events from the past; trees that have survived natural disasters or stand as silent sentries to the passage of time. And that’s only a small part of what makes an Oregon Heritage Tree compelling.

Serving on the Heritage Tree Committee are experts from many fields, including forestry, parks service, geological and environmental studies and heritage programs. The all-volunteer Heritage Tree Committee is always interested in new members and young ideas. You just need to love and appreciate trees and be willing to attend quarterly meetings.

Although certain trees may not qualify for statewide heritage tree designation, many community programs exist. Cities and counties that provide or oversee such programs do so under their parks and recreation or city planning and zoning divisions. Use our directory to search for community heritage tree program criteria, tours, maps, brochures, and nomination forms.

Maynard Drawson is considered the founder of Oregon’s statewide Heritage Tree Program.  A native Oregonian and Portlander, he first followed his father’s professional footsteps as a barber.

Somewhat early on in his career, Drawson settled in Salem and embarked on a personal and passionate journey—chronicling the great Oregon outdoors.  As an avid fisherman, history-buff, and writer, he authored a five-volume series entitled “Treasures of the Oregon Country.”

Drawson’s natural tendencies towards exploration led him deeper into Oregon’s wild where he connected with other “big tree” aficionados. His hiking trips into Oregon’s deep forests culminated in several big tree nominations to (and their acceptance into) the National Big Tree Registry.

As Drawson’s relationship with trees and tree preservation matured, he collaborated with state and federal officials to conserve a special group of Douglas and western hemlock trees. The Polk County preserve was named “Valley of the Giants”—and stands as a magnificent lasting reminder of the old-growth timber that once adorned the Oregon Coast Range.

Drawson advocated for a statewide heritage program that would weave historic events, places, and people together—connecting Oregonians to their much loved and significant trees. His enthusiasm and perseverance were rewarded when he presented his idea to the Oregon Travel Information Council and they agreed to manage a statewide program. The Council delegated program administration of the Oregon Heritage Tree Committee to its semi-independent state agency (TIC) and modeled the criteria on TIC’s Oregon Historical Marker Program.

After Drawson passed away in 2012 the Heritage Tree Committee sought new ways to encourage Oregonians in preserving and supporting our state’s historically significant trees. The first Maynard Drawson Memorial Award was presented in April 2015 during a public ceremony at the Oregon Department of Forestry. Brian French, the co-founder of Oregon’s Ascending the Giants, was the first honoree to receive the new award.

The Oregon Heritage Tree Committee has created a brand new award! The Heritage Tree Hero award recognizes individuals and groups that view Oregon’s history from the perspective of the trees that witness/are witnessing it. Tell us about an inspirational individual or organization that is engaging communities through education about the importance of trees and raising awareness about Oregon’s history told through trees and forests. We encourage nominations that tell the stories of historically under-represented communities whose contributions are an integral part of Oregon’s history.

The committee would love to have as many nominations as possible to look over for this first year so the application deadline has been extended until April. Any applications received after the deadline will be kept on file and considered for the next year’s award. Award designees will be notified in March and recognized at an award presentation ceremony held during Oregon Arbor month (April) each year. Emailed nominations are preferred.

Interested in nominating a tree? Read more about the nomination process.

The Travel Information Council’s heritage programs Facebook page is an excellent way to learn about special events and glean historical nuggets about heritage trees and historical markers. You can follow us by clicking on the Facebook icon.