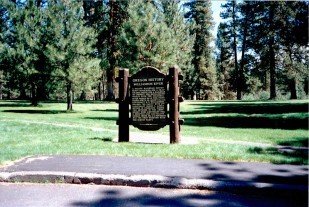 Subject:Camp site for the Pacific Railroad survey party in 1855.

A Pacific Railroad Survey party searching for a practicable route for a railroad to connect the Sacramento Valley with the Columbia River passed near this point bound north on August 20, 1855. Lieutenant R.S. Williamson headed the party with 2nd Lieutenant Henry I. Abbot second in command. Among the officers in the Army escort were Lieutenant Phil S. Sheridan and Lieutenant George Crook. Dr. J.S. Newberry was the Chief Scientist with the survey party.

There is another marker at this same location: Peter Skene Ogden