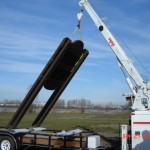 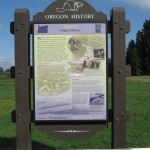 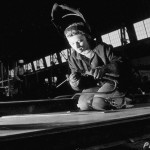 Subject:Site of the nation’s largest public housing project. Vanport was destroyed in a flood in 1948.

Within a year of the US entering World War II, more than 160,000 people moved to Portland- a city of only 360,000 – to work in Home Front industries. Industrialist Henry Kaiser’s three shipyards employed the most workers. To house his employees and their families, Kaiser persuaded the US Maritime Commission in 1942 to fund the nation’s largest public housing project. Within 10 months, Kaiser had built an entire community on 640 acres of low-lying farmland-Vanport.
THE VERY FIRST OF ITS KIND
Vanport soon became Oregon’s second largest city. Nicknamed Kaiserville, most Vanporters lived in one-bedroom apartments. There was a library, post-office, police station, infirmary, public cafeteria, stores, and a 750-seat movie theater. While most Americans had no medical insurance, Kaiser’s workers enjoyed a prepaid health plan. After the war, the plan and its doctors became the Kaiser Permanente medical and dental care program.

SWEPT AWAY
In 1948 at 4:17pm on Memorial Day, a portion of the dike surrounding Vanport was broken. The Columbia River swollen with early spring snowmelt flowed quickly into Vanport. Floodwaters 15 feet deep quickly washed Vanport away. Residents had been assured by authorities that the dikes were holding and that they would be warned in ample time to evacuate. The break caught everyone, including the authorities, by surprise. Thankfully, sloughs within Vanport absorbed the initial surge, allowing approximately 40 minutes for most people to flee Vanport to higher ground along Denver Avenue. Still, 18 people lost their lives in the flood.

With an overwhelming number of displaced people, private citizens took many Vanporters into their homes. Bitterness over the lack of proper warning by the authorities resulted in court cases. Ultimately, the courts decided the Federal government could not be held responsible for a natural disaster.

CAPTION #1
Dikes surrounding Vanport presumably would protect it from flooding, but an old railroad cut that had been filled in as part of the dike on the western edge of Vanport unexpectedly gave way.

CAPTION #2
After the war, pioneering aspects of Vanport’s child and health care programs remained popular examples of what a private enterprise and the government could achieve when united in a common purpose- “an experiment in the full socialization of life.”