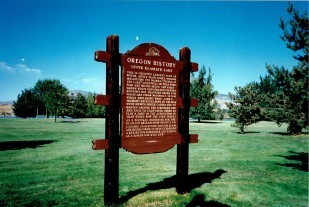 This is Oregon’s largest body of water, about 90,000 acres. Indians inhabiting its shores (‘People of the Lake’) lived well on wild fowl, fish and wocus seeds. The first known white visitors (1825-26) were Hudson’s Bay trappers under Tom McKay and Finan McDonald. In 1846, while exploring here, John C. Fremont received news of the war with Mexico, which caused him to hasten around the northern end and back to California, there to play a part in the acquisition of that state. Now the lake serves as a natural reservoir for the Klamath reclamation project, for logging operations and for Klamath River power plants. It remains a resort for fishermen, and famous as a haven for wild life.