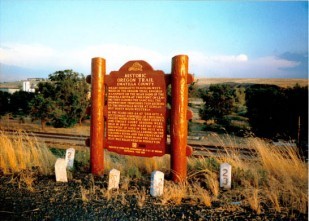 Subject:Campsite of emigrants on the Oregon Trail.

In the years 1863-64 at this site a settlement composed of 3 buildings called Middleton, the first County and Circuit Court Sessions were held in Swift and Martins Store. Discovery of gold in the Blue Mts. Area boomed Umatilla Landing on the Columbia River, and the County Seat was moved there. In 1868 the County Seat was relocated in Pendleton.

DONATED BY PENDLETON COMMANDARY NO. 7 K.T. OF OREGON