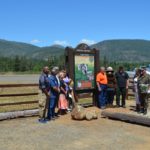 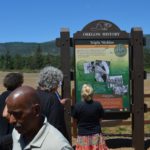 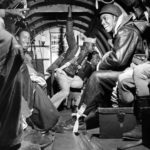 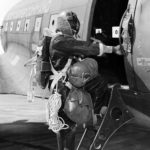 Formed in 1943, the all-Black 555th Parachute Infantry Battalion was the first opportunity for African American officers and enlisted men to become paratroopers in the segregated US Army during World War II.

Balloon Bomb Blazes
In 1944-45, Japan launched balloon bombs eastward across the Pacific to set US west coast forests ablaze and cause civilian panic. In May 1945, the military ordered the “Triple Nickles” on a classified mission, code named “Operation Firefly,” to counter this threat. Detailed to the US Forest Service, the 555th jumped on and fought Pacific Northwest forest fires.

Cross-Trained
The “Triple Nickles” trained at Pendleton Field in northeastern Oregon. Army Ordnance personnel instructed the 555th in bomb disposal while Forest Service “smokejumpers” trained them in parachuting on wildland fires and how to fight them. That summer, the “Triple Nickles” jumped on 15 fires and fought on at least 28.

Racial Segregation Ended
The “Triple Nickles” returned to their home base to North Carolina in 1945. At the request of Lieutenant General James Gavin, the 555th was assigned to his previously all-White 82nd Airborne Division in 1947. A year later, President Truman’s Executive Order officially ended racial segregation in the US military.

PFC Malvin L. Brown
555th Parachute Infantry Battalion
(1921-1945)
Malvin L. Brown enlisted in the US Army late in 1942. After qualifying as a paratrooper in the all-Black 555th Parachute Infantry Battalion, Brown trained as a medic. On August 6, 1945, “Triple Nickles” paratroopers based at Pendleton Field responded to a fire in Oregon’s Umpqua National Forest near Roseburg. PFC Brown volunteered to replace an ill medic on the jump list. His parachute caught in a tall tree and he fell more than 150 feet to his death. Fellow paratroopers carried his body several miles to the nearest road. PFC Malvin Brown left a widow and daughter. He is buried near his hometown, Baltimore, Maryland, and was the first smokejumper to die on a fire jump.

Caption 1:  Many of the first volunteers for the 555th came from the 92nd Infantry Division (nicknamed Buffalo). The name “Triple Nickles” symbolizes a combination of the Buffalo Division, the pre-WWII era “Buffalo Nickels,” and the 555th unit number.

Caption 2:  Homemade wire-mesh face masks, tight landing zones using military parachutes with limited maneuverability in the air, reaching the ground from 200 foot trees with 50 foot ropes. The “Triple Nickles” did their bit to win the war, with ingenuity, adaptability, skill and courage.