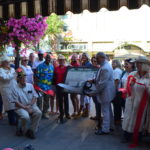 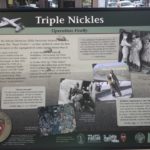 In 1943, The African-American 555th Parachute Infantry Battalion was formed. The “Triple Nickles” -as they spelled it- were the first black paratroopers in the segregated US Army during World War II.

In 1944- 1945, Japan launched incendiary balloon bombs across the Pacific to set US west coast forests ablaze and cause civilian panic. In May 1945, the military ordered the 555th on a classified mission, “Operation Firefly,” to counter this threat, and 300 “Triple Nickles” arrived by train only a few blocks from this street corner. They trained with Army Ordnance personnel and US Forest Service “smokejumpers” in bomb disposal and wildland firefighting. That summer, the 555th jumped on 15 fires and fought at least 28.

In October 1945, the “Triple Nickles” returned to their home base at Fort Bragg, North Carolina where they soon were assigned to the previously all-white 82nd Airborne Division under the command of General James Gavin.

Caption 1: “All was not work”
“on 4th of July we staged demonstration jumps for the local populace. We saw the famous Pendleton Rodeo…I learned to fly from two grand guys, Pat Stubbs and Farley Stewart. We went to movies and took time to hunt and fish.” – Bradley Biggs, Lt. Col. USA (Ret.)

Caption 2: “I was standing in the open door of our C-47 transport plane, flying at an altitude of 1500 feet and 150 miles per hour. ‘Why,’ I asked,’was I standing here on my way to a dangerous mission that could possibly get me and my men killed? Why would I die for a country that thought so little of me and my people?'” – Lt. Walter Morris

Caption 3: Pendleton Segregation in the 1940s
“The reception was cold. We could not eat in any one of the restaurants… Only two bars would serve us anything. We could not go into the hotel- they refused to give us a room…Hotels in town would not serve us. The people there, ‘were living in the Northwest but with a southern attitude.'” – Bradley Biggs, Lt. Col. USA (Ret.)

Caption 4:
Many of the first volunteers for the 555th cam from the 92nd Infantry Division (nicknamed Buffalo Soldiers). The name “Triple Nickles” symbolizes a combination of the Buffalo Division, the pre-WWII era “Buffalo Nickels,” and the 555th unit number.