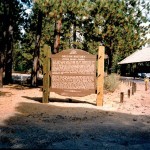 Subject:Travels of Ogden and his fur trapping party through Oregon.

Peter Skene Ogden, Chief Trader for the Hudson’s Bay Company, and Thomas McKay, Clerk, with a company of 15 employees and 20 freemen and some Native families and over 100 horses, left The Dalles, September 19, 1826. They went up the Deschutes and Crooked Rivers to the Harney Basin, exploring and trapping beaver, with little success. Returning over Newberry Crater to the Upper Deschutes and south to the Williamson, they encountered heavy storms and deep snow on Upper Klamath (Clammitte) Marsh and gratefully descended to Spring Creek here December 5, 1826.

The game had migrated out of the snow and they were happy to trade the Klamaths out of dogs and dried mullet to eat. The party traveled on south till discouraged by the Tule Lake Lava Beds. Turning back to the Klamath and down to Beswick Hot Springs, they trapped and explored on over into the Rogue River Basin. Spreading out their party they trapped the streams north and west of Mt. Shasta which Ogden named with its Indian name ‘Sastise.’ In May the party went east and north to the Harney Basin and the Malhueur River, then down the snake to Fort Nez Perce (Walla Walla).

There is another marker at this same location: Williamson River