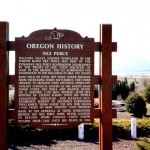 Wallowa Valley, summer homeland of the Joseph Band Nez Perce, was part of the expansive Nez Perce reservation established by the treaty of 1855. Upon discovery of gold in the region, the U.S. eliminated the reservation in the Wallowas in 1863. The Joseph Band held on until 1877 when, under pressure from increasing white settlement, they were ordered to abandon their ancestral homeland. Violent conflicts ensued as the Joseph Band joined other Nez Perce and Palouse bands on a historic 1,170 mile retreat. After five months of elusive flight, with his people exhausted, freezing and heavily outnumbered, Joseph in dignified surrender proclaimed: ‘from where the sun now stands I will fight no more forever.’ With promises made by the generals at their surrender broken, the Nez Perce were never allowed to return home though Chief Joseph pleaded their case until his death in 1904.