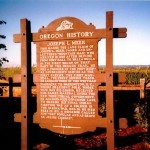 This marks the land claim of Joseph L. Meek, famed and unlettered ‘mountain man,’ who arrived in 1840 after driving from Fort Hall to Walla in the first wagon on that part of the Oregon Trail. He was a founder of the Provisional Government; served as the first sheriff, the first marshal, the first census taker. He carried word of the Whitman Massacre to Washington D.C., where President Polk, whose wife was his cousin, received him. Named marshal under the New Territorial Government, he accompanied Governor Lane to Oregon. His final Indian fighting was as a soldier in the Yakima War, 1855-56. He died here in 1875. A neighbor called him: ‘very popular and as brave as Julius Caesar.’