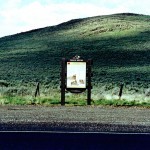 Subject:Gold mining drew emigrants from the east and west along the Oregon Trail

Beginning in 1843, thousands of Oregon Trail emigrants trekked through this region toward new lives in the West. This epic journey indelibly etched the landscape with wagon ruts, such as those near by. When Henry Griffin, a prospector from California, discovered gold eight miles southwest of present-day Baker City in 1861, the emigration pattern changed radically. Eastern Oregon quickly became a destination for gold-seekers and settlers-many arrived from the Willamette Valley reversing their initial journey along the Oregon Trail to settle in this area.

Mining camps sprang up with the prospect of gold and many boomed into towns. By 1862 the nearby town of Auburn, with a population over 5,000, was among Oregon’s largest cities. Local settlers established farms and stores, providing hay and produce to miners, and for much of the 1860s large wagon trains loaded with freight were a common site along this segment of the Oregon Trail.