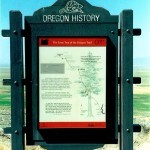 Subject:Tells the story of the tree that served as a landmark for Indians, trappers and Oregon Trail emigrants.

Early Oregon Trail emigrants crested the south flank of Flagstaff Hill and, with the Blue Mountains looming to the west, saw a solitary tree in the valley below. Called l’arbre seul (the lone tree) by French-Canadian fur trappers, this large tree, possibly ponderosa pine or Douglas-fir, towered majestically above the floor of Baker Valley about three miles northwest of this marker.

For many years–perhaps centuries–the Lone Tree served as a landmark for Indians, trappers, missionaries, and Oregon Trail emigrants, until felled in 1843 by what explorer John Fremont called, ‘some inconsiderate emigrant axe.’