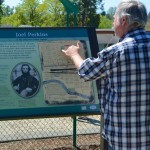 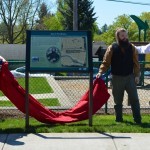 Joel Perkins was 23 years old when he and several relatives traveled the Oregon Trail from Indiana in 1844. He quickly settled a land claim and, in December 1846, established the town of Lafayette, which the Oregon Provisional Government recognized as Yamhill County’s first county seat. Perkins made himself the town’s clerk, and when he officially platted it in 1849, he donated a full block to be used as the “public square.”

Gold Rush Opportunities
During the Gold Rush of 1848, Perkins traveled to California and established a trading post to supply miners. On returning to Lafayette, he married 15-year-old Laura Hawn, and together they went to California, where she bore two children. On a return trip to Lafayette in 1856, Perkins was murdered in southern Oregon.

Yamhill County’s Oldest City Park
The public square is now known as “Joel Perkins Park” and has been a gathering place for Lafayette citizens at least since 1850, when the “square of Lafayette” was the starting point for a Fourth of July parade.

Caption:
A parade headed by the Lafayette band and containing a Goddess of Liberty car and numerous elaborately-decorated vehicles, beside several feature floats— marched to the public square,
where exercises were held.”
“Day Observed At Lafayette,”
The Morning Oregonian, July 6, 1911