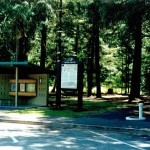 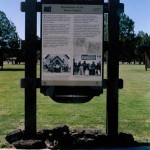 Homeland of the Burns Paiute marker

This region is the homeland of the ‘Wadatika’ (wada seed eaters), a nomadic band of Northern Paiute Indians. Today, the descendants of these people are known as the Burns Paiute.

Armed conflicts between ranchers and the ‘Wadatika’, during the late 1800s, led President Ulysses S. Grant to create the 1.8 million-acre Malheur Reservation in 1872. Pressure from settlers opened portions of the reservation to grazing and settlement by 1876.

Denied access to traditional lands, the ‘Wadatika’ soon faced starvation. Continued encroachment, combined with the U.S. Government’s failure to fulfill promises of food, shelter, education, and agricultural supplies, resulted in open warfare – the Bannock War of 1878. Upon defeat in 1879, the Paiute were forcibly marched to distant reservations. Congress terminated the Malheur Reservation in 1883 and made the land available for settlement.

Some Paiute drifted back to the region by the early 1900s. Most lived in extreme poverty either on land allotments too arid for farming, or in makeshift tents on the outskirts of Burns. In 1972, the Burns Paiute purchased 771 acres on which to live – and with this land base, they are regaining self-sufficiency and tribal identity.