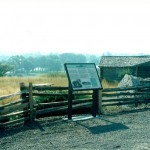 La Grande was the first town permanently settled in Northeastern Oregon. Daniel Chaplin laid out the original ‘Old Town’ in spring of 1862 and Ben Brown built the first house, a log cabin, alongside the Oregon Trail at the corner of B Avenue and Cedar Street.

As the prime lands of western Oregon were settled, and then gold was discovered in eastern Oregon, a reverse migration used the Oregon Trail from west to east. The ‘Old Town’ area grew quickly. James S. McClung noted in his diary on September 22, 1862, ‘we came to Legrande Citty 5 houses 1 store and a Black smith shopÉsome of the people were living in their tents & waggon beds until they could build houses.’ Just two weeks later Henry Herr wrote, ‘Oct. 9th. Grande Rounde Valley CityÉThis place is composed of 75 log cabins and emegrants with us are taking up claims and commencing to build houses. There are three stores.’

The post office was established in May 1863 under the name of ‘La Grande.’ In 1884, the shape of La Grande changed dramatically when Chaplin donated 105 acres to the new railroad and the commercial center moved from ‘Old Town’ to the tracks.