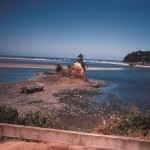 During the 18th century, Native American villages occupied the mouths of nearly every stream along this coastline – including here at Siletz Bay.

References to great flooding and ground shaking events are recorded in the oral traditions of many Pacific Northwest coastal tribes. These stories include instructions about how to prepare for large flooding events.

On January 26, 1700, the earth shook violently in the throes of a magnitude 9+ earthquake that occurred along the great offshore fault system called the Cascadia Subduction Zone.

From northern California to British Columbia the ocean floor heaved upward approximately 20 feet, and within 10=20 minutes a giant wave 30-40 feet high reached the shore. The wave probably struck this beach 22 minutes after the earthquake and fully inundated the coast in about 30-35 minutes. Devastating waves from this event continued to strike the entire coastline for several hours, flooding beaches, bays, tidal channels, and marshes.

From geologic records, we know that major earthquakes and tsunamis occur along this segment of the Pacific coast every 100-1000 years, and on average about every 500 years- we also know what to do when the earth shakes:

Caption1: Across the Ocean We

know the exact date of the January 1700 event through records of the tsunami that hit Japan as a result of the large Cascadia earthquake event here.

It is easy to imagine the terror, tremendous loss of life, and destruction that occurred here at Siletz Bay, and along the entire coastline in the wake of the great tsunami of 1700. But you can survive these large earthquakes and tsunamis by being prepared.

FOR MORE INFORMATION ABOUT EATHQUAKES AND TSUNAMIS contact your local emergency planning office, Oregon Emergency Management, or the Oregon Department of Geology and Mineral Industries.