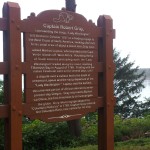 Captain Robert Gray, commanding the sloop Lady Washington, left Boston in October 1787 on a trading voyage to the West Coast of North America, seeking otter furs. To his small crew of about a dozen men, Gray soon added Markus Lopeus, who boarded at the Cape Verde Islands off West Africa. Rounding the tip of South America and sailing north, the Lady Washington traded along the coast, and reached Tillamook Bay in August 1788.

Trading with the native Tillamook went on for several days, until a dispute over a cutlass led to the death of crewman Lopeus and the hasty departure of the Lady Washington. Lopeus was the earliest documented person of African descent to enter present-day Oregon. Gray returned to Boston via China, the first American to circumnavigate the globe. On a return voyage aboard the Columbia Rediviva in 1792, Captain Gray entered the Columbia River, now named for his ship.