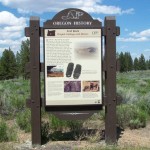 Fort Rock is the remnant of a maar volcano or tuff ring, formed when rising basaltic magma encountered water and exploded violently. The exploded debris—called tuff—fell back to earth around the volcanic vent to form this steep-walled, fort-like ring. Over time, the basin filled with a shallow lake, which breached the south rim of the tuff ring and cut a terrace about 60 feet above the floor of the valley. A State Monument and a National Natural Landmark, Fort Rock is one of several maars in the area; other examples are Hole-in-the-Ground, Table Rock, Flat Top, and Big Hole. Lookahead of you to the east for a view of Fort Rock in the distance.

• 6,000 years BP: People lived in small shoreline houses; they ate fish, seeds, roots, and game, and traded for shell beads from as far away as southern California and northern Mexico.

• As late as 150 years BP: Some villages remained occupied by the ancestors of today’s Klamath Tribes, Confederated Tribes of the Warm Springs Reservation, and Burns Paiute Tribe.