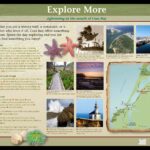 Sightseeing at the mouth of Coos Bay

Whether you are a history buff, a naturalist of a visitor who loves it all, Coos Bay offers something for everyone. Spend the day exploring and you are certain to find something you enjoy!

Crossing the Bar
While the natural harbor of Coos Bay has been a shipping hub since the 1850s, the bar at its entrance was a challenge to navigators, Bar pilot Capt. James B. And Sarah Magee built this house (map point 1) in 1873 near Empire City inside the mouth of the bar. The construction of the North Jetty (1890s) and South Jetty (1928)  improved the channel entrance for large ships and helped make this region the “Lumber capital of the world” from the 1940s to the 1970s. Start at the Magee House to hike the Sawmill and Tribal Trail to learn more about the bay’s sawmills, shipbuilding, and the inter-village paths of Coos tribal ancestors.

Charleston and South Slough
The fishing port of Charleston is home of the Oregon Marine Institute of Biology. The South Slough National Estuarine Research Reserve is south of Charleston off Seven Devils Road. The reserve, the first of its kind in the nation, was established in 1974, and is a working research facility with visitor exhibits and nature trails.

Two miles south of Charleston is one of the most photographed spots on the South Coast, Sunset Bay.

In between Sunset Bay and Cape Arago is the Shore Acres Botanical Gardens. This state park was once the estate of lumber tycoon Louis Simpson.

Find more shoreline scenery at Cape Arago State Park, where the South Cove Trail leads down to a sandy beach and great views of tidepools.