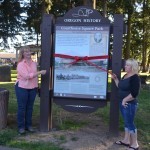 Dedication of the Courthouse Square Park marker in Dayton, July 18, 2013

Courthouse Square Park is a monument to the civic and commercial aspirations of Dayton’s founders, Joel Palmer, his son-in-law Andrew Smith and Christopher Taylor. Palmer and Taylor, who settled here to farm in 1848, laid out the town site on the banks of the Yamhill River in 1850. Taylor became the first postmaster in 1851.

An Anticipating Town Square
The founders hoped that Dayton would become the county seat of Yamhill County, and planned that a courthouse would rise on this block. When the courthouse did not come, the block became the town square, with a bandstand, fountain, war memorial, and a historic blockhouse.

Many Years of Service
The blockhouse served from 1856 at Fort Yamhill, a US Army post about thirty miles west of Dayton. The fort was a buffer at the western edge of the Grand Ronde Indian Reservation, where many Western Oregon natives were forcibly relocated after the wars of 1851-1856. When the fort was abandoned, the blockhouse was moved to Old Grand Ronde and used as a jail and storage building by the Bureau of Indian Affairs.
“Its form is different from the usual blockhouse, which had upper walls parallel to those below…here the upper block is the same size of the lower, but turned on a true diagonal.”
This design allowe for rifles to be fired form all eigth sides every 45 degrees instead of four sides every 90 degrees.
-Jamieson Parker, Historic American Building Survey

Caption 1
A Memorial to Joel Palmer
Oregon Pioneer (1810-1881)
Palmer came to Oregon from Indiana in 1845, and helped forge the Barlow Road around Mount Hood. He was Superintendent of Indian Affairs in Oregon from 1853 to 1856. Known as “General” Joel Palmer, he established the western Oregon reservations and led the way for removal of the tribes; which kept tribes safe from settler attacks. Palmer was forced from that office, accussed of favoring native interests over those of immigrant settlers.
The blockhouse was neglected until John G. Lewis of Dayton arranged in 1911 to acquire it from the US government. It was moved to Dayton’s Courthouse Square Park as a memorial to Joel Palmer.