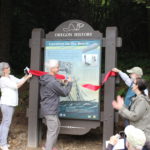 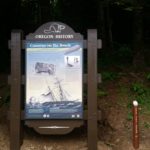 History in the Sand
Cannon Beach was named after a carronade (a short, smoothbore, cast iron naval cannon) found buried in the sand nearby. The cannon broke free of hte USS Shark’s deck during a shipwreck at the mouth of the Columbia River on September 10, 1846.

Recovering th First Cannon
Shortly after the wreck, a USS Shark crewmember learned from Tillamook Indians that part of the ship’s deck washed ashore south of what is now Cannon Beach. Three cannons had been affixed to that part of the deck. Midshipman Simes and others moved one cannon farther ashore, near the mouth of Austin Creek. Mail carrier John Luce spotted it there in June 1896 and, whith help, succeeeded in bringing it ashore. For many years, the cannon was displayed in front of the post office.

Two More Cannons Found
In 2008, teenager Miranda Petrone discovered another of the Shark’s cannons while walking along the beach at Arch Cape. Another beach visitor soon found the third cannon nearby. In  2014, after five years of conservation treatment at Texas A&M, two cannons went on display at the Columbia River Maritime Museum in Astoria. The first cannon found in 1898 was stabilized and returned to the Cannon Beach History Center in 2017.

The Great Name Swap
In 1912, a coastal community gave up the name Cannon Beach to change its name to a nearby geologic feature, Arch Cape. Nearby, the town of Ecola faced a problem: its mail frequently ended up in Eola, a town in Polk County 75 miles away. So, in 1922, the town of Ecola salvaged the Cannon Beach name for its own use, much to the delight of hte local postmasters.

Caption: USS Shark arrived at the mouth of the Columbia River in July 1846 so the crew could gather information and show the flag in support of the rapidly growing number of American settlers in the region. In September, the Shark’s captain, Lt. Neil Howsion, USN, attempted to cross the bar at the river’s mouth, but the vessel struck botom, broke up, and sank. All crew members survived.