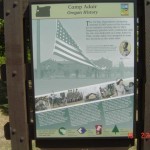 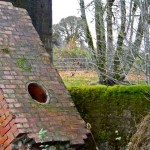 The US War Department ulimately selected 55,000 acres at this location for an infantry training site in 1941. Temporary quarters were constructed, and the site was dedicated as Camp Adair in 1942. Camp Adair was designed to train two divisions at the same time.

CAPTION #1:
The camp was named after Lt. Henry R. Adair, a West Point graduate and Oregon pioneer descendant, killed in 1916 while serving with Gen. John Pershing on a military expedition into Mexico in pursuit of the noted Mexican leader Pancho Villa.

CAPTION #3:
The influx of people brought by Camp Adair affected local communities in many ways. Housing became scarce as soldiers’ families sought nearby places to live. Several thousand local residents, some of whom had lived here since the Pioneer Era, were compelled to move- their farmsteads and even the village of Wells and its school were eliminated. Highways, a railroad, and several small communities, even cemeteries within the proposed camp area, were also relocated. Most displaced farm families took fair compensation money and relocated without complaint, given the emergency of the war effort.

CAPTION #4:
As the last infantry division left camp in 1944, Italian prisoners of war(POWs) arrived, later joined by a large number of German POWs. A portion of the site served as a POW camp until 1946. At different times, troops and POWs were pressed into service harvesting hops, beans, cherries, and other crops. In 1945, the hospital was turned over to the US Navy to treat injuries from the Pacific Theater and then converted to student housing for Oregon State College. When 45,000 acres of the camp were surplussed, original land owners were given the first option to purchase land. The rifle range and other property were assigned to the Oregon National Guard at their buy-out prices.