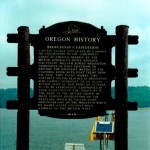 Native peoples have resided along this river since time immemorial. The river and adjacent lands have provided a bountiful life and a highway for extensive trade and travel. In the 1700s, European and American seafarers began plying the Pacific coast, seeking commerce, mapping, and claiming places along the way. In October 1792, HMS Chatham entered this river. Lieutenant Broughton, ship captain, led the party in small boats upriver to this easternmost point. His party traded with residents of the many plank house villages, took soundings, and journaled. Following custom, Broughton named observed landscape features — the nearby, snow-capped mountain for First Naval Lord Samuel Hood and a sandy point across the river for his commanding officer, Captain George Vancouver.