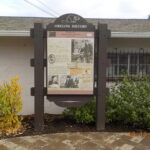 Abigail Scott Duniway
(1834-1915)
In 1860, Abigail Jane Scott Duniway and six other women shocked the town of Lafayette by attending a campaign speech by Col. Edward D. Baker, a U.S. Senate candidate. At that time, most people considered it inappropriate for women to take part in any aspect of political life. Age twenty-six at the time, Duniway’s leadership in the act was the first of countless actions for Oregon’s pioneer of woman suffrage.
Startting a Family in Lafayette
During her eight years in the Lafayette area, Duniway took in boarders, and taught at her own Union School. Married to Benjamin C. Duniway in 1853 (the word obey was omitted from their vows), Duniway gave birth to five sons and one daughter. The family moved to Portland in 1871. There, Duniway grew as an activist, publishing an influential weekly human-rights newspaper, The New Northwest, and editing two other papers.
Hard Work, Determination, and Victory
mentored by Susan B. Anthony, Duniway attended national conventions and helped form the National American Women Suffrage Association (NAWSA) in 1890. She served as one of NAWSA’s four Vice Presidents at Large. Lafayette was one of the towns where Anthony and Duniway gave speeches on their “Northwest Tour.” Duniway fought for women suffrage victories in Idaho and Washington before Oregon voters approved it in 1912. governor Oswald West recognized her 42 years of leadership and perseverance when he asked Duniway to write and sign Oregon’s Suffrage Proclamation. It was the first time an equal suffrage proclamation had been written by a woman in U.S. history.
Caption #1
On November 30, 1912, Duniway and Oregon Governor Oswald West signed the state’s suffrage proclamation, which began: “The women of Oregon, after long and patient effort, have persuaded the men of the State to place them on a footing of political equality…”

This marker was made possible through funding by the City of Lafayette.