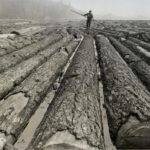 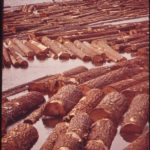 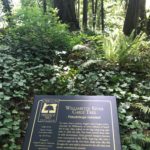 For more than a century, loggers used rivers, especially the Willamette, to move millions of board feet in logs. Until ground transport became more economical in the 1970’s, men walked the logs, assembling huge rafts with long pike poles that tug boats pulled down the river. Cables wrapped around the trees along the bank tethered the rafts to shore while they waited for access to mills, sometimes for several months.

This Oregon Heritage Tree site includes a black cottonwood with cables still embedded in its trunk and a Douglas-fir with cable scars still visible. You can view them in Wilsonville’s Memorial Park Forest Trail, a scenic unpaved walking path along the Willamette River. 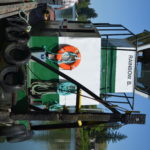 With their girdled bark, Memorial Park’s heritage trees show where loggers and boat operators tied up logs from the mid 1800s until the 1980s. Wire cables provided the critical (and often tumultuous) connection between land and water. For more than 150 years, the Willamette River was the primary transport mechanism for getting logs to Oregon’s mills. Remnant tree scars show where wire rope cables were secured around the base of the trees to secure log rafts. It was common to see rafts filling the shores of the Willamette while operators awaited their scheduled deliveries to the mills for processing. I’m among the fourth generation of Bernerts that tied log rafts along the Wilsonville riverbank en route to mills at Canby, West Linn, Oregon City and downstream. My nephew, Michael Bernert, now guides the family business (now Wilsonville Concrete Products) started by his great-great-grandfather. The Rainbow B, built in 1937, served the business well for many years and remains in the family’s possession. It was among the first steelhulled vessels on the upper Willamette and also one of the earlier twin screw/propeller vessels, designed to allow better navigation in tight situations. These boats would commonly go to Albany, Corvallis and Eugene, more than 150 miles upstream. Working on log rafts was dangerous. Workers did not have the safety equipment used today (i.e. life jackets, hard hats, etc.). Crew wore overalls and work clothes for protection and warmth, but also had to be able to swim if (when) they fell in the river. Family members, friends and others worked together; senior tugboat skippers directed work and used the larger boats. Smaller boats provided support. Most logs were moved manually, using long pike poles, peeves and axes. Every worker carried an axe to hammer lines in and bundles logs together Crew members were typically given a company axe, but had to replace it when it was lost (axes sink when dropped in the water). Secured logs needed to rise and fall with the river. Tie grounds were usually in locations where the logger could access the logs. Suitable trees needed to be strong, close to the bank, and healthy. Wilsonville’s heritage trees demonstrate are great examples of important trees along the Willamette that helped us get our job done.

Joe Bernert, GIS/Database Manager at Oregon State University’s Institute for Natural Resources, grew up on the upper Willamette towing log rafts with his father and brothers.