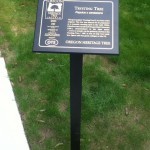 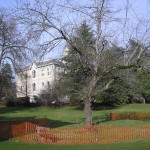 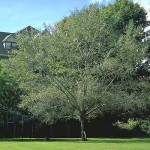 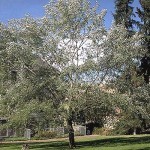 This large Gray Poplar (Populus canescens) located southeast of Benton Hall on the Oregon State University campus in Corvallis, was a popular gathering spot on campus shortly after the university (at the time the school was known as the Oregon Agricultural College) was founded.  The tree got its name around 1900.  The OSU Class of 1901 christened it as the “Trysting Tree”  after college President Thomas Gatch admonished two students for meeting there regularly for romantic purposes.  It is claimed the Trysting Tree was so named because of its “magical effects on students, especially in springtime”.  The tree’s popularity was such that the Board of Regents felt obliged to place two arc lights on the cupola of Benton Hall “to keep the tree from being overworked.”

Poems and verses have been written about the tree.  Homer Maris’ poem Carry Me Back became OSU’s alma mater in 1919.  It includes the verse “I love to wander on the pathway, down to the Trysting Tree.  For there again I see in fancy old friends dear to me”.  Now located in a National Historic District, the tree is a widely recognized symbol of Oregon State, one of only two Land, Sea, Space and Sun Grant institutions in the US.