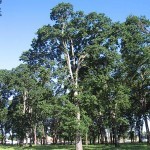 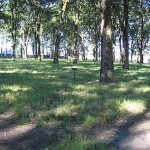 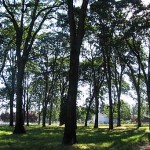 Dating back for six to ten thousand years before the arrival of Euro-American settlers, Kalapuya Indians lived in the Willamette Valley and relied upon on the valley’s oak groves as source of acorns and other food resources such as camas. The practice of following seasonal rounds to gather food and plant materials led the native people to recurrent camp grounds, one of which is believed to be the oak grove at the State Fairgrounds in Salem.

When the State Fair was established in 1862, visitors came in wagons and camped in the oak grove continuing the tradition of historic use. Camping at the Fair became an annual event and evolved into a system with streets and designated campsites. The first automobile arrived in camp in the early 1900’s and in 1910 there is a record of ten cars being in the camp. By 1922, it is estimated that at least 2,000 autos were on the grounds.

The Fairgrounds Oak Grove is located at the Oregon State Fairgrounds in Salem on the west side of 17th Street across from the Jackman-Long Building.