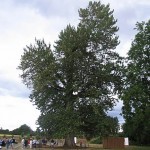 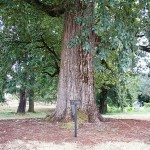 The Riding Whip Tree, as it became known, grew from a black cottonwood riding switch that was stuck in the ground by fifteen-year-old Florinda Geer in 1854 after returning from a horse ride with her uncle. The stripling took root and today stands as a massive monument to the early settlers of the Waldo Hills. In 1936, the Daughters of the American Revolution memorialized this tree with a bronze plaque, and in 1986 it became Marion County’s first heritage tree.

Florinda Geer was married to neighboring farmer, physician, surveyor and politician Timothy Davenport in 1855 and in 1868 gave birth to Homer Davenport who became the nationally famous political cartoonist.

The Riding Whip Tree is located on the GeerCrest Farm approximately 5 miles south of Silverton at 12390 Sunnyview Road NE.