The American elm street trees (Ulmus Americana) in the community of Orenco were planted in 1912 by the town’s namesake – Oregon Nursery Company.  A nationally known nursery in its time, the company was employee owned.   ORENCO shipped its nursery stock on the Oregon Electric Railroad line which is now used by MAX light-rail.  Many Oregon cities we know today were formed from company towns such as Orenco.

You can click on the images below to see full size. 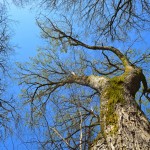 The elms are gorgeous even in winter. 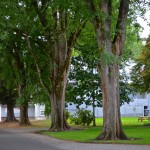 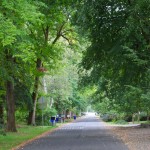 The town’s streets are lined with graceful heritage trees.

The nursery was established at this location in 1906 and Orenco was created as the company town.  The nursery was the largest nursery on the west coast at that time.  Orenco was platted in 1908, and was incorporated as a city in 1913 with approximately 500 residents.  The city was dis-incorporated in 1938.  However, many of the historic homes and commercial structures remain.  The nursery company planted street trees around Orenco in 1912, primarily elms but also birch and oak.

In order to preserve the community’s historic character, the Hillsboro Zoning Ordinance includes special provisions for the Orenco area, to protect the elms and to retain the rural character of the community.