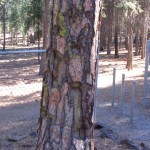 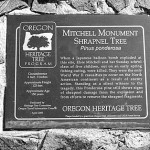 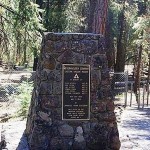 The scars on this Ponderosa pine are the remaining evidence of Japanese bomb fragments, since chopped out, that hit the tree in World War II. In 1943, six thousand balloon bombs were launched by the Japanese, traveling the jet stream wind current over 6200 miles to their destination along our west coast. In 1945, six locals happened upon one of the unexploded bombs while setting out for a fishing trip. Its detonation killed all six, causing the only WWII casualties to occur on continental U.S. soil as a result of enemy action. Although our government knew of the bombs, they withheld the information from the public. After this incident, they finally released information warning of the danger. Perhaps their public silence worked. Six months after the release of the first balloon, seeing no result, the Japanese cancelled the program. All should note that only 369, of the thousands of balloons, have been accounted for.

The Mitchell Monument is at the Mitchell Recreation Area, 13 miles northeast of Bly, along Forest Road 34.