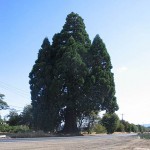 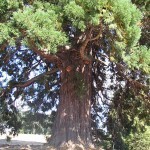 James Withycombe served as Oregon’s governor from 1914 until his death in 1919. He was one of only two foreign-born Oregon governors. Born in Tavistock, England, he came to Oregon with his parents in 1871 at 17 years of age. He purchased a farm two years later and married Isabel Carpenter on June 5, 1875. He planted this redwood on their wedding day. Gov. Withycombe was known for his vision and commitment to making Oregon one of the country’s greatest agricultural states.