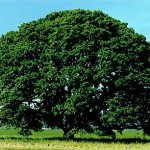 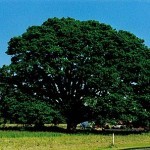 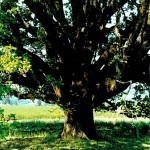 Ewing Young, fur trapper and trader in the Southwest and Mexico, turned settler in the Chehalem Valley in 1834. He was the first American settler in the Oregon Country who was independent of aid from the Hudson’s Bay Company. His death on February 15, 1841, left considerable property and no heirs. This problem created the necessity to form a civil government, which directly led two years later to the Champoeg Meeting and the beginning of the organization of the Provisional Government of Oregon in 1843, the first government by Americans on the Pacific Coast. On May 6, 1846, an acorn was planted on Young’s grave near his cabin site by Miranda Bayley and Sidney Smith.

The Ewing Young Oak is located 1/4 mile north of State Highway 240, 4 miles west of Newberg, Yamhill County. This tree is on private property and can be viewed from Highway 240; public access is limited.  For details call Oregon Travel Experience at 800-574-9397 during regular business hours.