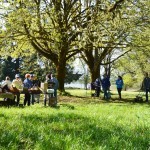 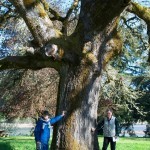 The trees that make up the Ellmaker Grove include the 300-400 year old Ellmaker Oak and numerous large big leaf maples that were planted by the Ellmmaker family, a large incense cedar that sheltered the family’s cattle at night and during foul weather.  The first owners of the land and hence the trees were the Zumwalt family, who obtained a Donation Land Claim for the property around 1852.  Just four years later they sold the land to Enos and Elizabeth Fisher Ellmaker.  The Ellmakers moved their family to the land and remained for over 80 years until the Army Corps of Engineers began buying up land to create Fern Ridge Reservoir in the early 1940’s