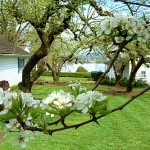 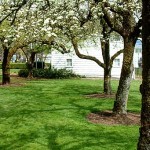 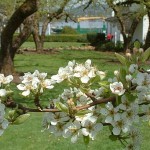 Joseph Caples with his three children crossed the Oregon Trail in 1844 and in 1846 claimed 320 acres on the site that is now Columbia City. Joseph built his log cabin from timber cut and stacked by the Hudson Bay Company who had intended to build a fort on the site. Charles, the oldest child, later studied medicine in Portland and became the first doctor in Columbia County taking a land claim near his father’s claim in 1866. In 1869, the Caples family platted the town of Columbia City on Joseph’s land claim and in 1870 Charles built his house, which was also his medical practice, on the site of the original log cabin. Charles also planted an orchard of plum trees at this time, but after it was decimated by bears, the current orchard of apple and pear trees was planted.

Charles’ daughter lived in the house until 1959 when she gave it to the Oregon State Society Daughters of the American Revolution who has operated the property as a museum since.

The Dr. Charles Caples House museum and orchard is located at 1215 First Street in Columbia City.