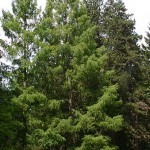 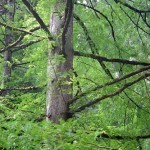 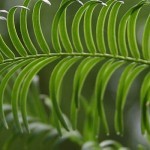 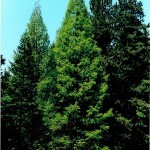 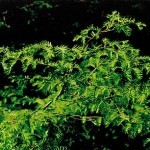 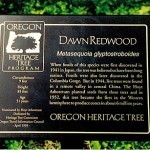 Although it is now known that Dawn Redwoods graced the landscape of the world’s northern temperate regions during the time of the dinosaurs (Late Cretateous), fossils of this species were first discovered in 1941 in Japan. At that time the tree was believed to have been long extinct. But in 1944, live trees were found in a remote valley in central China. Fossils have since been discovered in the Columbia River Gorge. Harvard’s Arnold Arboretum arranged for seeds to be collected in China in 1947; these seeds were then dispersed to several arboreta and institutions in the U.S. in 1948. The Hoyt Arboretum was one of the recipients of the seeds and they were planted in 1948. In the fall of 1952, the Hoyt Arboretum’s Dawn Redwood became the first in the Western hemisphere to produce cones in about 6 million years.

The tree is located in Hoyt Arboretum near Bray Lane, 4000 SW Fairview Blvd. in Portland