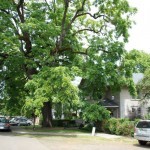 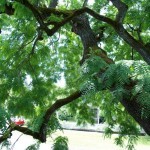 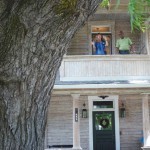 Heritage Tree Committee members, Nancy and Ed, admire the historic walnut from the balcony of the Christian Zimmerman House

This black walnut, was planted by the Zimmerman family sometime around 1884.  The Zimmerman’s were prominent members of the Aurora Colony, a religious community led by Dr. William Keil, that immigrated to this location from Bethel, Missouri. David Zimmerman was a carpenter and most likely planted the tree and others like it, for its valuable hardwood.

Dr. William Keil’s German commune, based on common ownership, equality, and cultural achievement was established in 1844 in Bethel, Missouri, not far from Independence, the organizing point for many of the Oregon Trail wagon trains. “Oregon Fever” soon spread to the Bethelites, and by 1857 Keil had founded a community in Oregon, named after his daughter, Aurora. After establishing their commune, word quickly spread of the Bethelites success, attracting new German immigrants. These immigrants were talented and industrious and their products gained a wide reputation for excellence during the early days of Willamette Valley settlement. The thriving colony was self-supporting and soon established markets in Portland for their agricultural products, tools and machinery, fine furniture, baskets, and textiles. Word quickly spread that the best food and music in the state could be found in Aurora, attracting many Sunday travelers from Portland.

The houses and buildings represent one of the largest concentrations of structures built by German craftsmen in the Pacific Northwest.