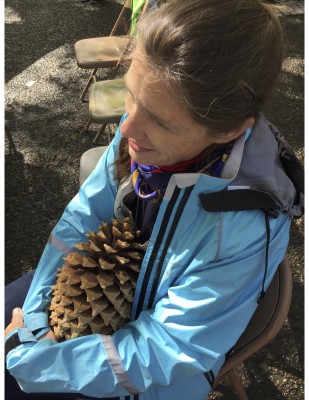 This was the second Maynard Drawson Award presented since its inception in 2014. The annual award is given to Oregonians who perform exceptional and sustained efforts to promote the value of our state’s trees, and who educate the public about notable trees or groves.

Maynard Charles Drawson (1925 – 2012) is considered the founding father of the Oregon Heritage Tree Program. He is credited with discovering many Oregon trees on the National Big Tree Registry. When Drawson passed away in 2012, the Heritage Tree Committee sought a way to encourage Oregonians to keep alive Drawson’s enthusiasm for the preservation and promotion of our state’s historically significant trees.

One of Drawson’s greatest lifetime accomplishments followed a tree “hunting” expedition in 1974. He and his friend Guy Higginson, a forester with the BLM, ventured into the headwaters of the North Fork of the Siletz River and what they hoped was record big tree territory. What they discovered was a stand of Douglas-fir trees with trunks measuring more than 20 feet in circumference. These rare survivors of 19th century logging were destined to become Oregon’s Valley of the Giants.

About the award and 2016 recipient, Catherine Mushel 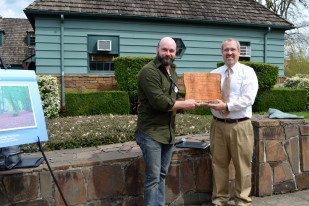 “We are incredibly pleased that Catherine Mushel is to be honored for her dedication to keeping Oregon’s trees healthy for all to enjoy,” said von Domitz.

“Brian French (the 2015 winner and co-founder of Ascending the Giants) and Catherine Mushel are legendary for their work in promoting trees. Both are specialists in their field, and bring an awareness of the importance of trees in our communities—in many cases, helping ensure these trees live well beyond human lifespans into future generations,” said von Domitz.

Catherine Mushel exemplifies Maynard Drawson’s commitment and zest for Oregon trees, including heritage and Portland street trees. From her early upbringing and remarkable childhood experiences in the woods of Montana, Mushel developed an awareness about trees and their ability to sustain and nourish earth’s inhabitants.

As an adult living in the Willamette Valley, Mushel observed that trees were witnesses to the many people and events that took place around them—capable of withstanding decades of cultural and economic shifts.  Mushel is a citizen activist with a bent toward being inclusive and rational while being totally committed to keeping the world alive through its trees.

Mushel joined Portland’s Friends of Trees early on in Portland to plant trees in her own and other neighborhoods. As a volunteer with Friends of Trees, an amateur garden designer, and the chair of her neighborhood tree committee she has promoted trees in private gardens and in the community for nearly 20 years.  Neighbors suggested she apply to serve on the Urban Forestry Commission, and she was appointed  as a member in 2011.

“For Catherine, all trees possess a sacred benefit and value, and her desire is to help others understand their significance and importance,” Karps said.

“We are indebted to Catherine and her colleagues for their commitment and tenacity,” said von Domitz. “Without their contributions, Oregon’s notable trees might not survive.” 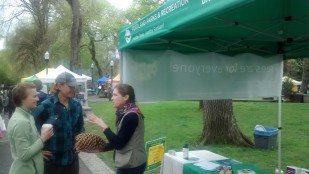 Mushel is also a member of her Eastmoreland Neighborhood Association Tree Steward Coalition—helping raise funds and strengthening public engagement to advance the health and vitality of Portland’s street trees.

“We are indebted to Catherine and her colleagues for their commitment and tenacity,” said von Domitz. “Without their contributions, Oregon’s notable trees might not survive.”

For more information about the Maynard Drawson Memorial Award and guidelines to nominate an individual or group, download the nomination form on the OTE website at https://oregontic.com/news-press/call-for-nominees-2016-maynard-drawson-award/.

The Travel Information Council, doing business as Oregon Travel Experience (OTE), administers  Heritage Programs that include the Oregon Heritage Tree Program and the Oregon Historical Marker Program. OTE is a semi-independent state agency charged with promoting public safety, preserving the recreational value of public travel on state highways and promoting economic prosperity by directing motorists into nearby communities. This includes preserving the natural beauty and aesthetic features of rest areas, and providing information regarding and maintaining points of scenic, historic, cultural and educational interest.

Media inquiries about the Maynard Drawson Memorial Award or OTE Heritage Programs should be directed to Annie von Domitz at 503-373-0864 or email to anniev@oregonte.com.