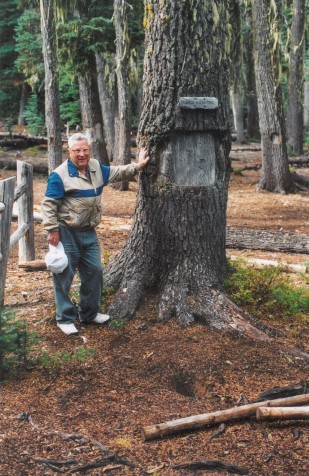 OTE, the Oregon Heritage Tree Program and its committee members were sorrowed to hear of our friend Maynard Drawson’s  passage from this world to the next.

Maynard was instrumental in helping to save some of Oregon’s most important trees. The Oregon Heritage Tree Program would not exist if not for his life’s work preserving trees. All of us involved with heritage trees are going to miss Maynard’s enthusiasm and dedication.

The following is a speech honoring Maynard, from June 6, 2008, at the Oregon Heritage Tree dedication of the Valley of the Giants (which is also a Bureau of Land Management (BLM) designated Outstanding Natural Area.) The remarks were made by Jim Renner, the Oregon Travel Experience (OTE) Heritage Tree Program administrator at the time.  We offer it today, in honor and in memory of Maynard’s accomplishments on the behalf of Oregon’s trees.

In tribute to Maynard Drawson

Born July 3, 1925 in Portland, Oregon, Maynard Drawson lived in Salem all his life, except for his time in the Navy serving in WW II.

His father, Nicholas Drosopulous, came to America from Greece on a cattle boat at the age of 16.  He change the name to Drawson because he wanted to be American.  He was a barber and so was Maynard and his younger brother, Gail (d. 2005).

Maynard quit high school to join the Navy at age 17 (where he later finished school).  He was sent to Farragut Idaho for basic training, then to San Diego where he attended radar school.  Radar was so new that it was secret and restricted information.  He was then sent to Boston, Massachusetts and assigned to the heavy cruiser USS Boston that sailed to the Panama Canal and off to the Pacific Theater.  Maynard then spent two years in the combat zones of the Central Pacific as a radar man and where Maynard was a witness to the Battle of Iwo Jima where the Boston fired its eight inch guns on the island.

After three and half years in the Navy, Maynard returned to Oregon where he attended barber school in Portland and settled in Salem where he married Dee Dawson and raised 7 children.

Upon returning home he was convinced that the Pacific Northwest was the greatest spot on earth and endeavored to search out and learn as much as he could about the original “Oregon Country.”  An avid outdoorsman, Maynard began a life of exploring special places and discovering history and interesting people at every turn. 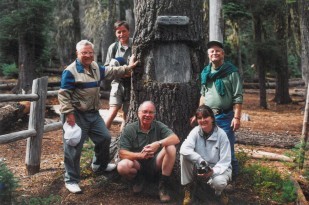 About 1960, Maynard sought out one person who would dramatically affect his life.  That was Oliver Matthews, whom Maynard dubbed the “Northwest’s Dean of Tree Detectives” and whom for years had been nominating trees to the Big Tree Registry of the American Forestry Association.  As Matthews’ protégé, Maynard learned about big trees by driving Mathews around the state to revisit all the record trees that he had found and nominated to the Big Tree program.  Soon, Maynard was hunting for big trees himself and in the process met a wide assortment of old-timers with stories to tell.  Maynard began writing those stories down and his avocation as a writer was born.

Maynard went on to author five books, Treasures of the Oregon Country, Volumes I – V, from 1973 – 1979.  Maynard also became a regular contributor to Salem newspapers.

But it was his profound interest in trees that has carried him to his greatest fame and earned him the sobriquet of being “Maynard, the Tree Man, Drawson.”  Through his trips and network of friends, Maynard has found scores of record trees, ranging from State Champions to National Champions, many of which are still titleholders.

One of Maynard’s greatest lifetime accomplishments was the product of a big tree hunting expedition made in 1974.  Led by his friend Guy Higginson, a forester with the BLM, the two men ventured into the headwaters of the North Fork of the Siletz River where Higginson had heard there was a place with some very big trees.   What they found was a stand of Douglas firs like Maynard had never seen before.  Dozens were more than 20 feet in circumference, and one dubbed “Big Guy” was 35 feet around and 250 feet tall.  This was the “Valley of the Giants.”

Upon returning to Salem, Maynard determined to launch a campaign to preserve these trees.  He asked what the BLM plans were for these trees and learned that eventually they would be cut.  Maynard then asked Archie Craft, the BLM’s Regional Director, what he should do and Craft encouraged him to work within the agency structure which prompted Maynard to write the District Manager, Bud Vladimiroff.  The campaign had begun.

Field trips to the Valley of the Giants were organized and attended by the BLM, Polk County officials, the news media, and interested citizens.  The BLM Salem District submitted a formal request to the Regional office asking that the area be set aside for preservation; the dutiful response was a directive to gather “citizen input.” 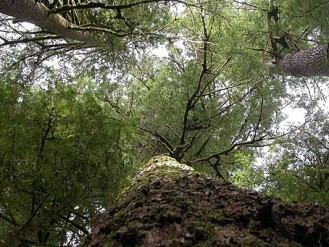 Maynard organized more field trips, gave lectures, and made TV and radio appearances talking about the Valley of the Giants.  And he wrote lots of letters, and encouraged his audiences to do the same.

Maynard’s love and trees and history found a natural confluence through his idea of recognizing tree’s that have an important history, or “heritage trees.”  Maynard’s ideas took root with the establishment of heritage tree programs in Salem and Marion County, and spread to Yamhill County and beyond.  In 1994, Maynard began an effort to establish an Oregon Heritage Tree Program and in 1995 found an agency that shared his vision: the Travel Information Council/ DBA Oregon Travel Experience.  In November, 1995 the Heritage Tree Committee held its first meeting and launched the first state sponsored heritage tree program in the nation.  And who was a charter member?  Of course, Maynard Drawson.