Malus domestica
Reverend Albert Kelly planted an orchard here on his homestead in 1850. The trees were bought from the pioneer Luelling and Meek Nursery in Milwaukie- the first grafted fruit tree nursery on the west coast.
Colonel Henry E. Dosch purchased the property in 1886-87 and restored the health of the neglected orchard. In 1976, the Home Orchard Society declared this tree the oldest, living, grafted apple tree in the Western … 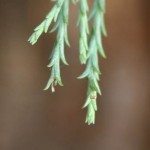 Sequoiadendron giganteum
The majestic trees that grace the grounds of the Washington County Courthouse were planted in 1880 as three year old seedlings by pioneer nurseryman John R. Porter. The Porter family came west to Oregon, from Ohio, in 1847. John Porter developed an interest in trees and started a nursery on his farm. When word of the California Gold Strike reached Oregon, he rushed there to seek his fortune. On …

Ulmus americana
This tree was given to Douglas County by Binger Hermann. Hermann served in the U.S. Congress from 1885 until 1897, and again from 1903 until 1907. During the intervening years, he was Commissioner of the General Land Office in Washington, D.C. The occasion for the tree donation is not known positively, but research suggests that it was planted very near the turn of the century, possibly at a dedication … 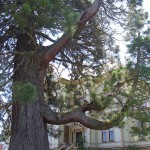 Captain George Flavel was a noted bar pilot and entrepreneur in Clatsop County. His piloting business and other investments helped in the development of Astoria. Flavel’s 1886 Queen Anne style house now stands as a historical museum, inseparable from the beautiful landscaping that surrounds it.
The Captain Flavel Trees are nine trees originally planted by the family gardener, Louis Schultz. The grove consists of a giant sequoia, ginko, Camperdown elm, bay …