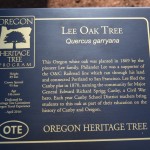 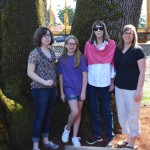 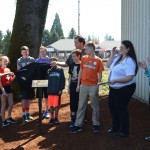 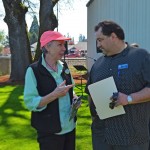 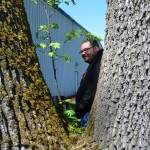 The Lees and their seven children arrived in the Willamette Valley in 1848. In 1850, they took advantage of the Donation Land Claim Act to gain title to their 611 acres in what is now known as Canby.

The oak tree the family planted sits on the site of the family’s third home, which was constructed by carpenters with the Oregon and California Railroad in 1869. When Lee died in 1887, his son Albert made it his residence, living there with his family and his mother. The home and the tree remained in the Lee family until 1967, when the property was sold to Package Containers, Inc. by the last Lee resident, Ora Lee Cattley, Philander’s granddaughter.

In 1870, Philander Lee sold 111 acres of his property to the Oregon and California Railroad, a line that eventually connected Portland to San Francisco. The company used that property to establish a twenty-four block town center. Lee and other residents laid out the site. An O&C employee surveyed and mapped the property. Lee filed the Canby plat in Oregon City on August 9, 1870, naming the community for Major General Edward Richard Spring Canby, a Civil War hero assigned to the Oregon Territory in 1870.

Several of Lee’s children played important roles in Canby’s civic and commercial development. Albert Lee, with his business partner and brother-in-law George Roork, opened the first general store in 1871. He also served as the city’s first railroad agent. When the town incorporated in 1893, Heman Lee became the first mayor and Albert Lee served as the clerk/teller. Philander Lee’s grandson, Millard Lee, played a crucial role in establishing utilities and developing real estate. He also launched the bus service that connected Canby to Oregon City before the completion of Highway 99E.

Each year their property becomes an extension of the Canby School Districts classrooms when teachers bring their students to the site as part of their education on the history of Oregon and Canby.