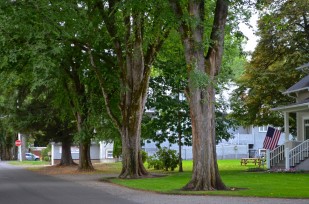 On Saturday, September 28, 2013, a line of majestic and significant trees near Hillsboro will be formally inducted into the Oregon Heritage Tree Program. Orenco’s heritage is deeply rooted in the agricultural nursery industry of the early 1900s and the town’s elm trees are to be honored accordingly.

The ceremony is scheduled for 10:00 a.m. and will be held near the historic trees’ location at the corner of 228th and NW Birch Street in Orenco. Oregon Travel Experience (OTE) and its community partners will host the celebration and the public is invited to attend. 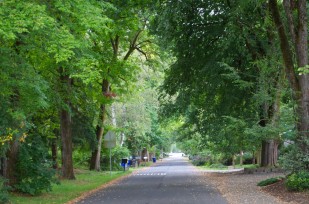 What makes this dedication unique is that it both highlights the history of how Orenco was established and why the trees’ guardianship is significant to the contemporary populace.

The Oregon Nursery Company (ORENCO) was established in 1906.  ORENCO was the largest nursery on the west coast at the time. A nationally known nursery, ORENCO shipped its nursery stock all over the country on the Oregon Electric Railroad line which is now used by MAX light-rail.
Subsequent employee-owned housing rapidly grew into a company town and nicknamed  Orenco, after the company’s acronym. The township was platted in 1908, and incorporated as a city in 1913 with approximately 500 residents. 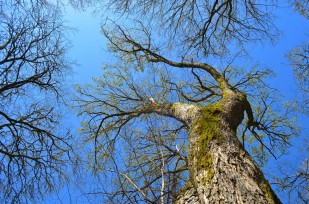 The soon to be immortalized trees have average heights of 30 to 80 feet, circumferences of 80 to 150 inches, and average crown spreads of 15 to 45 feet. Their age is approximately 100 years old.

Rambling through the streets by foot or bicycle, it becomes apparent that  the Orenco Heritage Elm Trees possess a huge presence and deep relationships with their townspeople.

In order to preserve the community’s historic character, the Hillsboro Zoning Ordinance includes special provisions  for Orenco to protect the elms and retain the rural character of the community.

For those wishing to attend the event, the closest address to the dedication site is the Unitarian Church, located at 22785 NW Birch St, Orenco, Oregon, 97124. The dedication coincides with other city-sponsored Fifth Annual Orenco Heritage Day events, and community potluck to be held at the church.