When OTE assumed management of the Tillamook rest area one year ago, its onsite rest area team embarked on a vigorous campaign to revitalize the surrounding landscape. The team’s goal was to improve visibility and safety for motorists, and at the same time, highlight the rugged beauty of Oregon’s North Coast.

In 2012, OTE held a grand rest area “re-opening” event and invited the Tillamook community to celebrate with us. However, that day’s attendees may have glimpsed a Blue Star Memorial Highway marker hidden beneath a thorny field of wild blackberry vines.

Originally conceived as a “ribbon of interconnected memorials” to honor WWII veterans, the Blue Star Memorial Highway Marker Program was adopted by the National Council of State Garden Clubs in 1945. Garden clubs across the US placed bronze plaques at state lines, rest areas, and at entrances to towns. Some years later, the program expanded to include past, present and future veterans of all wars. Nearly 70 years since their installation, many of the original Blue Star memorials have fallen into disarray as garden club volunteers passed on.

History beneath the brambles

Following OTE’s Tillamook rest area celebration, our team began to excavate the Blue Star memorial from its shroud of blackberries. The newly visible plaque caught the attention of 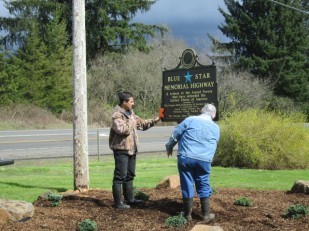 Jesse Exton, a local resident and veteran, whose childhood recollections of the marker reach back to the early 1960’s.  The elder Exton encouraged his grandson (also named Jesse Exton) to pursue a restoration project with the young man’s Eagle Scout troop.

After receiving guidance from OTE’s Policy and Rules Advisor Jim Renner, OTE gave the younger Exton a thumbs-up to proceed. Exton contacted groups and individuals still involved with the Blue Star Memorial Program.  It took young Jesse several months to gain approval from not only the Blue Star Foundation, but also the Nestucca Valley Garden Club and the local Boy Scouts of America Council.

Exton initiated work in early 2013— hauling brush the team cut down. He also dug blackberry root-balls from the ground by hand. Several weeks later, the memorial was removed from its moorings and shipped to the Blue Star marker fabricator for restoration. In anticipation of the marker’s return, Exton assembled work parties (including his granddad, the elder Exton) to prepare the landscape and install new plantings around the memorial’s foundation.

To help support the marker project, Exton raised money from local organizations to pay for restoration expenses, including new shrubs and bark dust. Contributors include the local chapter of the Veterans of Foreign Wars (VFW), Tillamook County Master Gardener Association, the Nestucca Valley Garden Club (of which two members are still active), and of course, Grandpa Jesse Exton. 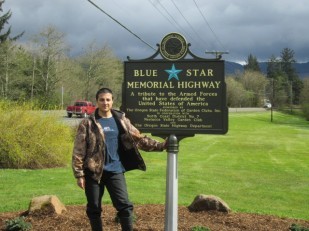 Young Jesse was able to install the newly refurbished memorial in mid-April. He is still coordinating a re-dedication ceremony. Unfortunately, due to significant delays and approvals in the project, Jesse’s 18th birthday arrived before the project was completed. Scouting regulations require Eagle Scouts to earn a palm prior to a candidate’s 18th birthday, so it remains unclear whether Exton will receive the award.

Regardless of palm status, Exton’s memorial restoration work is a significant contribution to his community. His volunteerism has created a legacy for our nation’s veterans that will be visible to all Oregonians. Rest area visitors have already commented on how meaningful it is to see the memorial revitalized. Our Tillamook team is impressed with the determination and grit that Exton displayed during the lengthy project.

Update, May 8, 2013:   OTE was notified that Jesse Exton received his Eagle Scout award following the posting of this article in the online Tillamook Headlight Herald. Congratulations Jesse, a job well done!