This week, OTE’s sign crew and their Oregon Department of Transportation brethren were onsite at Dayton’s Courthouse Square Park, drilling holes and securing a brand new historic marker into place.

“Normally, if we arrange for ODOT’s sign crew to drill deep post holes like these, it could run us several hundred dollars,” said Bryant. “But they really stepped up and helped the community of Dayton out.”

The image gallery shows the crew as they use a boom to lift the heavy Port Orford cedar frame into place, and the new marker in front of the historic Dayton Blockhouse.

Installation on the marker was completed in time for an upcoming community and public dedication slated for Thursday, July 18th at 6:30 p.m. in the square.

David Porter, member of the Oregon Travel Information Council and the Oregon Historical Marker Committee, was exuberant about the long-planned for addition. 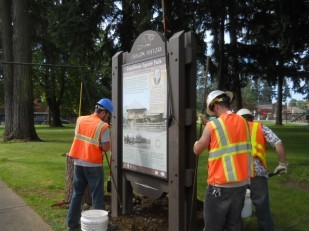 “What a great step forward this is,” said Porter. “The experience of going to Dayton to see the blockhouse will be a hundred times better.  The marker is beautiful and truly worthy of our Oregon Historical Marker designation.”

The City of Dayton significantly enlarged its heritage tourism footprint this year—in great part, due to efforts by Kelly Haverkate and the Dayton Community Development Association(DCDA). The new Courthouse Square Park and Fort Yamhill Blockhouse historical marker is a result of strategic planning by the DCDA and its partners and volunteers, to revitalize and attract more visitors to Dayton’s historic downtown.

“One of Dayton’s great strengths is its rich history,” said Haverkate. “We need to tell our story in a way that will reach the largest audience.”

Dayton will replace their weathered Blockhouse historical marker with a Courthouse Square Park interpretive panel. The new panel honors Dayton’s founding father Joel Palmer and illustrates how the blockhouse was moved by horse and wagon train in 1911 from the 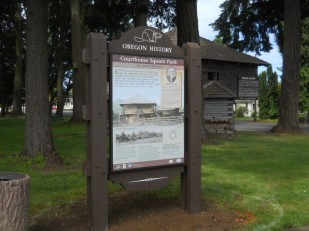 edge of the Grande Ronde Valley.

The DCDA received a Heritage Grant from the State Historic Preservation Office and Oregon Parks and Recreation. DCDA volunteers provided in-kind assistance, and the City of Dayton provided the matching funds required for the grant.