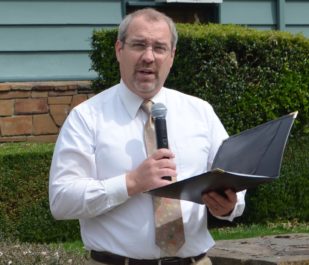 Ries was a founding member of the Oregon Heritage Tree Program and personal friend to Maynard Drawson. Drawson is considered to be the founding father of the program; the award was created in 2015 as a way to honor his name posthumously and to encourage others to engage in the preservation of Oregon’s historically significant trees.

Ries’ contributions are innumerable–and Jim Renner, the first state official to help coordinate the Oregon Heritage Tree Program, cited many examples in his nomination of Ries:

“Ries’ outstanding work includes his oversight and mitigation of the Governor Withycombe Giant Sequoia during roadside construction. In addition, his advocacy for the Klootchy Creek Sitka Spruce persuaded Clatsop County to maintain the standing remnant of the first tree inducted into the Oregon Heritage Tree Program for its educational value. His persistence to document and nominate the Governor McCall Maple when the only remaining evidence of the governor’s ceremonial planting of the tree existed as oral history and eye-witness accounts.” 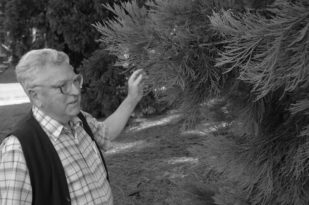 Renner also spoke of Ries’ efforts in raising public awareness of significant Oregon trees, and his participation in the restoration of Oregon’s Grove of the States (which will be honored as a Heritage Grove this summer).

“Ries made countless trips to inspect and certify the eligibility of nominated heritage trees. He attended every possible tree dedication, and made innumerable presentations about the Heritage Tree Program to public groups. His foresight and commitment to the conservation of worthy trees was also extended to the efforts to save and redevelop the historic Grove of the States.”

For over 25 years, Paul Ries’ urban forestry experience has encompassed local, state, national, international, non-profit, and academic levels. Ries is an Urban Forestry instructor and Extension Specialist in the College of Forestry at Oregon State University (OSU) and was the manager for the Urban and Community Forestry Assistance Program for the Oregon Department of Forestry (ODF). 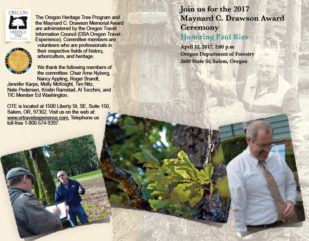 At OSU, he teaches online urban forestry courses and is the lead curriculum developer for new undergraduate and graduate degrees in urban forestry. For ODF, he directed a statewide program that provides technical, financial, and educational urban forestry assistance to cities, community groups, and non-profit organizations. Ries sits on the board of directors of the International Society of Arboriculture (ISA) and has maintained ISA certification as an arborist since 1989.

The Oregon Heritage Tree Program and the Maynard C. Drawson Memorial Award are administered by the Oregon Travel Information Council (DBA Oregon Travel Experience). Committee members are volunteers who are professionals in their respective fields of history, arboriculture, and heritage.