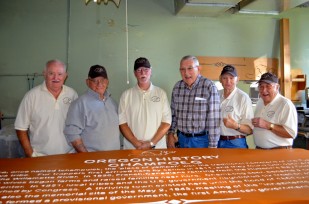 While text review and correcting historical fact is a large part of the program’s responsibilities, “old school” wood marker construction and maintenance falls to a group of unsung heroes: the Oregon Historical Marker Salemtowne Volunteers. Oregon’s historical markers would most likely disappear from public view if it were not for eight men devoting their golden years to preserve Oregon history for all to enjoy. 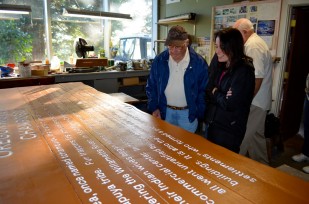 How they make it happen

Salemtowne retiree Wayne Sharp is a member of both the Oregon Historical Marker Committee and the Salemtowne Volunteers.  I caught up with Wayne and the rest of his volunteer group as they were applying final changes to the refurbished and updated Champoeg State Park marker.

“In order to reuse the existing wood for the updated marker, we had the old text planed out and sanded, and then got it ready to receive the new text,” said Sharp. “We used Port Orford cedar since it not only matches the original wood used for the 1950s and 60s markers, but it lasts for a really long time.”

Sharp should know—he’s been on the Salemtowne volunteer crew for 17 years. “Dick Ackerman was the chairman of the Oregon Historical Marker Committee at the time,” said Sharp. “And one day he called me and Lloyd Wilbrech up and said ‘I think I’ve got a job you’re going to love!’ We ended up at his place drinking coffee and eating cookies while he showed us pictures of the markers. He thought it might keep us busy in our retirement.” 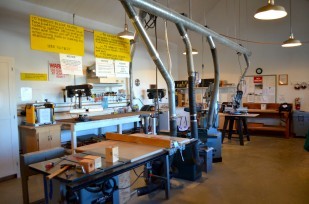 As the years flew by (and his friends Ackerman and Wilbrech passed away), Sharp found other willing volunteers from Salemtowne who stepped in to help maintain the markers.

“People would come walking by our little shop and see us working and say ‘Gee, that looks like a lot of fun!’” said Sharp. “Pretty soon we had eight or nine guys who showed up to help on a regular basis.”

“When we restore a marker, the very first step us to make sure the wood is clean and dry, “ said Sharp. “Then we remove all loose paint and make sure the holes or cracks are filled.”

Sharp showed me a set of detailed instructions that include the size of sponge rollers used to apply latex brown paint to the marker, as well as how to install slats to prevent warping. Much of the work perf 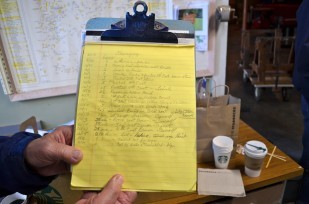 ormed on the new (or rebuilt) Champoeg marker was completed in the Salemtowne workshop.

“The Champoeg marker is a really big one,” Sharp said, “It weighs in at about 800 pounds. First off, we sent it to the planer to remove the old text and sand it smooth. Next, the boards were delivered in separate pieces to Andrew Sparre, who routed the letters for the updated text. Finally, the pieces came back to our Salemtowne workshop where we assembled it and applied the required layers of primer and paint. When we’re done, we’ll arrange with Oregon Travel Experience for the marker to be installed back at Champoeg Park.”

A high percentage of marker restoration work takes place outside the shop—and several Salemtowne volunteers take to the road when an existing marker needs new paint or other repairs.

“We’ve traveled to just about every corner of the state,” said Sharp. “From Lava Lake in the northeast to Klamath Falls and Gold Beach in the south, so we’ve got plenty of stories. One of them sticks out pretty well in my mind. 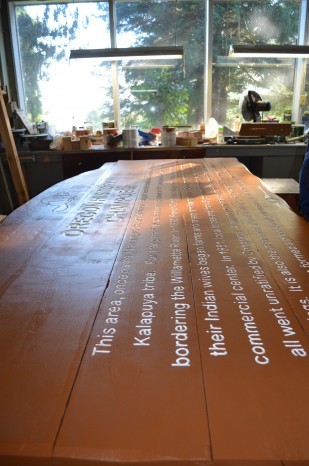 on applying layers of new paint to a marker in Antelope, when we noticed a visitor with her family picnicking nearby. She started to watch our every move.  First, we rolled the white primer across the front of the boards where the lettering is, and then we applied white paint with the roller. At that point in the process, we don’t worry that paint is going outside the lines of the lettering since the boards are going to get three coats of the historical brown paint by the time we’re done.

“However, as we finished rolling on the white paint, the visitor came running over with a wad of water-soaked paper towels saying ‘If you hurry up you can wipe off that wet paint!’ One of the guys told our new friend not to leave until we were all through. When we finished applying the brown, and the white lettering stood out just fine, she said ‘That’s amazing! You guys are just amazing!’”

Back at the ranch

The day I visited Sharp, the rest of the Salemtowne volunteers were busy checking the Champoeg marker from every angle. When the last layer of historical brown paint is rolled across the front and dries, the white lettering is carefully touched up with a tiny brush. Routed letters are deeply inscribed, and the brown paint tends to drip slightly into small crevices, causing odd breaks in portions of the text. The men scrutinize the lettering from the sides and from a distance to ensure readability before the marker passes inspection.

As the letters were touched up, I followed volunteer Melvin Christy upstairs to the Salemtowne woodworker’s shop where he was manufacturing protective caps for the marker posts. Each mushroom shaped cap starts out as a square block of wood, but rapidly becomes a decorative finial under Christy’s ca 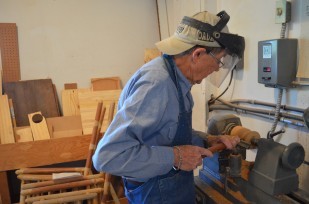 “First I measure and draw the mushroom shape in pencil on the block. Then I attach the block to the lathe and start the process of shaving it down to a cylinder,” said Christy.

Christy demonstrated how he applies calipers to ensure the proper circumference—and golden sawdust from the spinning lathe soon covered his work apron.

“The caps will protect the marker from getting rainwater or snow down the holes,” said Christy. “This will help the boards to hold up for years.”

As with Christy and Sharp, members of the Salemtowne volunteers devote hundreds of hours each year to maintaining Oregon’s historical markers. Their woodworking, construction, or engineering expertise does not fade away with retirement from former careers; in fact, the volunteer’s hearty spirit and enthusiasm seems best summarized by the words of the Oregon visitor who said, “You guys are just amazing!” 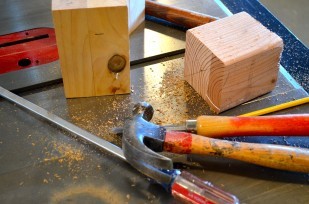 Thanks to the Salemtowne champions of Oregon history, the refurbished and historically accurate Champoeg marker will be heading for its new location in the park’s day-use parking area, sometime in November. A spring dedication honoring the renewed marker is in the planning stages.