As part of the 2012 Oregon Heritage Tree Statewide Dedication festivities, we’re blog-posting on the four honorees. Up fourth, a tree for romantics and historians. 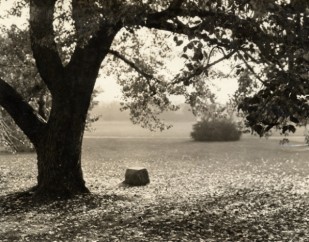 For heritage tree lovers everywhere, a trysting tree equals both romanticism and history at the same time. Nominated for the 2012 Class of Oregon Heritage Trees, Oregon State University’s (OSU) 29 year old Trysting Tree will be one of four trees honored this year during an Oregon Arbor Week event in April.

Located within a National Historic District southeast of Benton Hall, the tree is a widely recognized symbol of OSU. In a fast paced world, the word “tryst” may seem antiquated. However, the word distinctly connects the tree to a period in time when a courtship was deemed poetic.

In 1901 the parent grey poplar apparently received its name when OSU President Thomas Gatch admonished two students for meeting there regularly for romantic purposes. It is believed the original tree was planted between 1880 and 1885 by George Coote, a Horticultural College faculty member.

Do trees possess alchemical spirits? It’s claimed the OSU Trysting Tree had magical powers, since it seemed to affect students amorously in the springtime. Home Maris’ poem entitled “Carry Me Back” memorialized the poplar in verse: “I love to wander on the pathway, down to the Trysting Tree. For there again I see in fancy, old friends dear to me.”

The OSU Trysting Tree is actually a bit of a reincarnation. In 1987, the original tree was cut down due to advanced disease found in its limbs and trunk. Prior to its removal, one of several cuttings was rooted near the location of the original tree and grew into a healthy specimen.