As part of the 2012 Oregon Heritage Tree Statewide Dedication festivities, we’re blog-posting on the four honorees. Up third, a scrappy Illinois Valley survivor of tough soils and challenging climate. 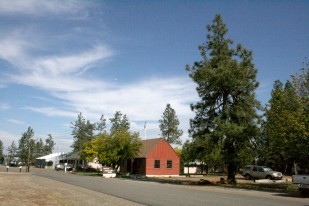 Perhaps something of a rarity, all Oregon Jeffrey pine trees are located within the state’s southwest corner. Tolerant of arid conditions, nutrient deficient soil, and high concentrations of chrome and nickel, the Smokejumper Heritage Pine Tree has adapted to its location in the Illinois Valley well. It is also the only Jeffrey pine within the program.

The honored tree grows adjacent to the Illinois Valley Airport runway and historical buildings associated with Oregon’s first aerial firefighters. The Siskiyou Smokejumper Base is one of four such bases in the US built in the early 1940s. The base was established following an incendiary bomb-drop by the Japanese in Brookings, Oregon in 1942. Forest fires required significant manpower and equipment to control, and many thought the Japanese may have intended to wage war on American soil by starting fires and distracting military personnel.

In the 1950s cold war era of air-raid drills, the Siskiyou Smokejumper Base was upgraded. New buildings were constructed and the number of fire- fighting crews bolstered. Many trees on the base were removed, but the Jeffrey pine was spared— most likely to serve as a telephone pole. Bedrock in the region is extremely hard and digging post holes difficult. Since the tree was well positioned near the smokejumper buildings, it made good utilitarian sense. The insulators are still attached to the tree today.

Firefighters in the Aerial Firefighters Program were transported by aircraft to remote wilderness fires and parachuted into otherwise inaccessible areas. Two to four jumpers could extinguish a fire while it was still small and easy to contain. The smokejumper method prevented lightening strike fires from blazing out of control or committing hundreds of firefighters, heavy equipment, and thousands of dollars in resources.

This Class of 2012 pine is approximately 150 years old and 50-feet tall. Its trunk at chest height measures six-feet in circumference and is in good health. The Smokejumper Heritage Tree also has a connection to another tree in the program, the Apollo 14 Moon Tree. The Moon Tree’s seeds were carried on their lunar voyage by smokejumper Stuart Roosa who worked at the Siskiyou Smokejumper Base before he became an astronaut.