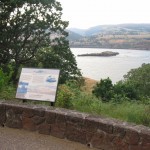 Memaloose Island in the background

Memaloose Island, visible from this point, was once an important Indian Burial Ground for Mid-Columbia Tribes. The dead were wrapped in skins or blankets and often placed in a sitting position, sheltered by Grave Houses of poles, slabs and bark. Before water rising above Bonneville Dam reduced the original four-acre island to about half an acre, Indian remains were removed for reburial elsewhere. The monument marks the grave of Victor Trevitt, pioneer printer who moved to The Dalles in 1854. A member of the first State Legislature and State Senator 1866-74, he was buried in 1883 according to his wish on the Indian Burial Ground.’ In the resurrection I’ll take my chances with the Indians,’ Trevitt said. The Chinook jargon word ‘Memaloose’ is from the Chinook Language ‘Memulust’ meaning ‘to die.’